Second Roundtable of the BASREHRT project took place on the 28th of April 2022. It was also organized via web. The TEAMS session consisted of two parts; it started with a 90 minutes discussion by four experts in hydrogen and energetics sectors and followed by switching over to participate in the international off-shore wind energy event, hybrid conference WindWorks. Rethinking Energy in Riga­. Off-shore wind-based electricity generation is seen as one major source of renewable energy giving also a good basis for green hydrogen production. Off-shore wind potential has been the topic of the first roundtable in Estonia. This time the scope has widened to collaboration between Estonia and Latvia, two partners in the frame of cooperation project BASREHRT.

To briefly introduce the project granted by the Swedish Institute, it is The Baltic Sea Renewable Energy and Hydrogen Experts Roundtable, devoted to creating a common platform to work with top-level, highly qualified experts in the field of renewable energy sources and hydrogen. Its’ overall aim is to create a multinational and cross sectoral platform for collaboration, consisting of renewable energy and hydrogen technology actors for building a future carbon- and other climate pollutants emissions’ free energy system solution. The discussion between the leading stakeholders of the Baltic Sea region is aimed on sharing the expertise in certain fields of renewables most popular in one or another country. In Sweden it is focused on biomethane to be used in transport and housing sector. In Latvia and in Estonia the main focus is on the wind sector, in particular – the off-shore wind.

Similarly to the first Round Table, the TEAMS session started with an introduction from Björn Aronson, the managing director of Vätgas Sverige, followed by the discussion between Dr. Mats W Lundberg, head of sustainability at Sandvik Group, board member of Metacon AB , Dr. Anders Nordlöf, researcher, Environmental systems Analysis, Chalmers University of Technology and prof. Aigar Laizans, Supervisory council member of JSC Latvenergo, Vice-rector at Latvia University of Life Sciences and Technologies. The main topic discussed was the approach how to join efforts of politicians and technology sector experts in Baltic Sea region towards green hydrogen production and based on that various hydrogen applications’ wider uptake in three neighboring countries. Following the main challenge of the project „How can we join our forces both internationally as nationally and also, the relevant organizations in the new, war reality in Ukraine“.

After introductory session the work continued with the second part of Round Table 2. The participants were smoothly transferred to Riga international off-shore wind energy event Baltic Offshore. Rethinking Energy, organized by the Latvian Wind Energy Association in cooperation with Latvenergo AS, also with the Danish Embassy in Latvia, business technology platform BISMART.It was already the second in its kind highly representative gathering of major actors in Europe to discuss off-shore wind prospective. The conference could be followed via the Youtube link https://youtu.be/OVvvJBx_AGw.

Countries around were represented with the ministerial people, technology sector experts, wind developers, TSO’s from Germany, Denmark, Estonia, The Netherlands, Great Britain, Poland. The wind developers like Vestas, RWE, Ramboll, Sunly, Enefit Green, Eolus, et al. brought with the newest knowledge to be implemented in the years to come. Both in Estonia and in Latvia the offshore wind is developing extremely rapidly. The Baltic governments have done big steps forward to remove obstacles in this challenging renewable energy sector. Two neighbors started the very first of its kind cross-border project ELWIND, an offshore wind park in Liivi Bay what will significantly increase the green electricity production in both countries.

The event was opened by the president of Latvia, Egils Levits, followed by the introductory speech by Kadri Simson, European Commissioner for Energy. Dan Jorgensen, the Danish Minister of Climate, Energy and Utilities emphasized the urgent need to start the practical cross-border collaboration to achieve climate neutrality. On behalf of Latvian Wind Energy Association the encouraging words for near-future developments in offshore wind sector were said by Tom Naburgs.

The work of a conference type event was organized by five panel sessions:
1) Cross-border cooperation to achieve climate neutrality
2) Can we rely on offshore wind for low electricity prices?
3) Off-shore knocking on Latvia’s door – are we welcoming it?
4) Grid – The backbone of offshore development
5) Electrification of Latvia – a Dream or Reality?

The event was moderated by prof. of Riga Technical University Reinis Áboltinš who smoothly ran all panel sessions in fluent English.

His professional remarks and highly relevant interventions made the whole day enjoyable.

The representatives of Estonia, Timo Tatar, vice chancellor of the Ministry of Economic Affairs and Communications; Aavo Kärmas, CEO of Enefit Green,; Priit Lepasepp, CEO and co-founder of Sunly, Getlyn Allikivi, Elering AS, head of Offshore Grid Unit participated in the panel sessions. 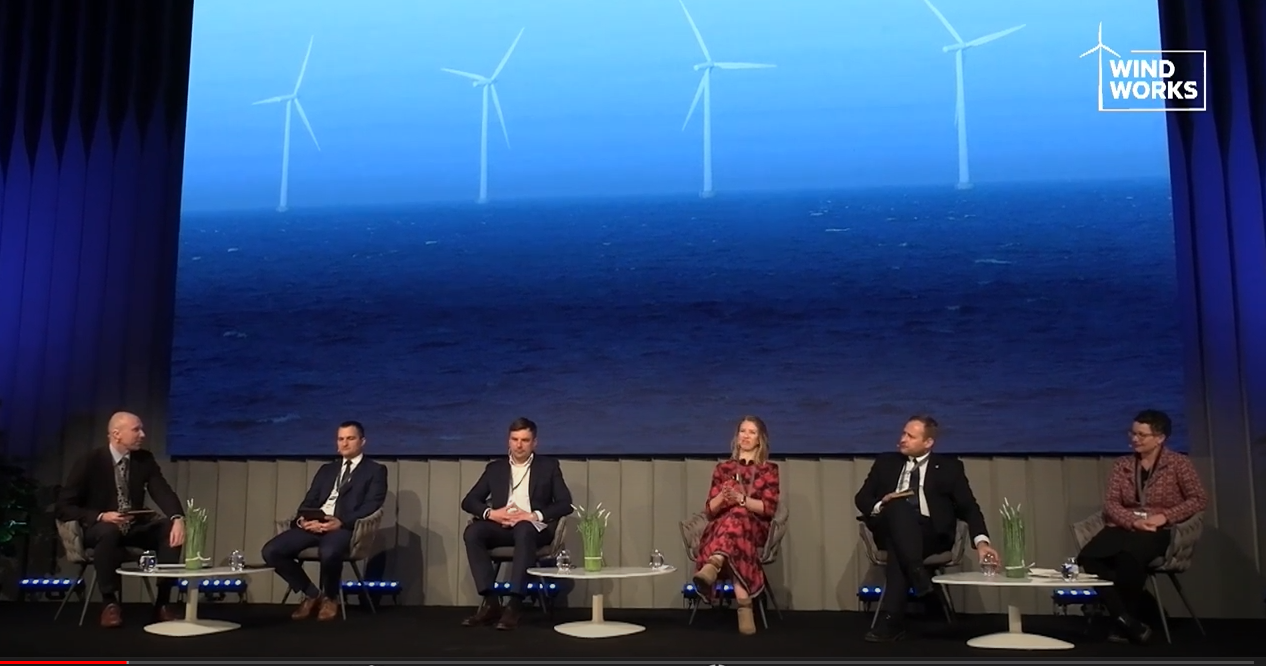 The topic of maritime spatial planning has been discussed by a number of panelists. Maritime Spatial Plan is in principle a national strategic document of spatial development including the SEA, Strategic Environmental Assessment. The spatial plan specifies the areas where maritime activities can be carried out, and under which conditions. By now it has been fixed by law in Estonia. Up to now this procedure had no correct legal basis and the preparatory procedure has been long and lengthy in both countries. The former practice showed a lengthy process lasting for a decade or even longer. The panelists agreed commonly, this must be shortened significantly. Latvia has made a huge step forward and fixed the much shorter, up to 6 months, time period for SEA. Maritime spatial planning is a tool that is used for the long-term planning of the use of the sea to ensure both the economic benefits of using marine resources and the value of the sea and coastal areas as socially and culturally significant areas.

The final session was aimed on the issue of practicalities in production of wind energy based green hydrogen. The capacities of Estonia’s and Latvia’s offshore windfarms in pipe will be obviously exceeding the electricity consumption in two countries. Hence, the problem of saving, accumulation of electricity is the next big issue to be raised. In connection to that green hydrogen production will gain an ultimate importance.

The issue of grids was the connecting line and major topic in most of the panel sessions. Whether the grids will be able to receive all generated electricity? How to optimize the location of grids? Electrons or molecules to be transferred? May-be the more efficient solution will be to produce green hydrogen and use the molecules instead of transferring electrons?

These issues should be solved on the basis of economic calculations bearing in mind also the future needs of electricity demand. All participants agreed that we have to start with preparations right today to introduce the Green transfer via decarbonization of our economies.